The purpose of these posts is to explore the newly release thread-aware memory model supported by the new C++11 standard. But before we get our hacking on, we'll need to get some terminology out of our way. These terminology can be divided into a couple of questions that we'll answer in this post

Ensure a class only has one instance, and offer a global point of access to that instance.

In many situations you’d find yourself in need of ensuring that a certain class can only be instantiated once and is accessible in various parts of a system.
Example for such situations is:

The singleton pattern provides us with two properties:

Note Singletons are meant to be used sparingly, so if you find yourself using them everywhere you might want to take another look at your design.

Use The Singleton pattern when you want your classes to provide you with only one instance that is globally accessible to the code from an access point.

SingletonClass: This class provide global access to only a single instance of it by doing the following:

Like any pattern, the singleton pattern has its tradeoffs (according to its implementation) and if it is used while being unaware of these tradeoffs can produce unwanted results.

First criticism: Using it is considered a breach to one of the OOD Principles: The Single Responsibility Principle, which states that:

Thus, the class shouldn’t care less for being a Singleton or not, as it’s only concern should be doing its business responsibility. But when using Singleton, the class is responsible for two things here:

Second criticism: We all know that having global variables in our code, produces code smells. But, isn’t this what the Singleton Pattern does? It makes an instance of the class accessible globally. There disadvantages of using global variables that apply when we use Singletons without proper care because of the similarity in their nature.

Some of these disadvantages are:

If we want to overcome the mentioned shortcomings, we could separate the singleton part from the actual object, allowing for the object itself to be used normally if needed. Perhaps we can use a Factory or a builder that would encapsulate the object creation and maintain having only one instance created of this class, while leaving the class responsible only for its business responsibility.

J. B. Rainsberger argued in his article “Use your Singletons wisely” that classes should not be responsible for the singleton part of the code:

Disadvantages of this implementation:

It is not thread safe as in some situations, separate threads can invoke the GetInstance for the first time simultaneously. So when both of them reaches the statement if (_instance == null) it will be evaluated as true, thus both threads will see that it is valid to instantiate a new object. To avoid this issue, we have to write thread-safe code .

This specific implementation of Double-Checked locking can be factored into:

When working in a multi-threaded environment, we risk running into issues that arise from resource-sharing between multiple threads, like deadlocks and race conditions (What is a race condition?). This implementation of the Singleton Pattern however saves us from all this drama.

The use of the volatile keyword on the instance member variable allows us to avoid the unexpected and unpredictable results in multi-threaded programs that access fields without synchronization and using the lock statement to synchronize access. The volatile keyword indicates that a certain field can be modified by multiple threads, avoiding the compiler optimizations that assume access by a single thread. This ensures that the most up-to-date value is present in the field at all times.

Having data shared between threads is the best recipe for obscure errors and complexity when working in a multithreaded environment. A way of solving this problem is using locks in order to stop more than one thread from working on the same data at the same time.

The lock keyword marks a statement block as a critical section by obtaining the mutual-exclusion lock for a given object, executing a statement, and then releasing the lock (source: lock Statement [MSDN Library]). The idea is to ensure that a thread can’t enter a critical area in the code, when another thread is still executing it. If two threads encounter a lock, one thread waits(blocks) until the lock becomes available.

So, in layman’s terms we can say that the mutual-exclusion lock acts as a simple door lock. You enter a room, you lock the door behind you and when you finish your business, you unlock the door and come out of the room, only then can somebody else enter. If anybody tries to enter the room while you are still in there, he has to wait.

You might ask yourself why can’t I just simply use the lock this way:

instead of the implemented one:

The problem with the first implementation is that it hinders the performance of the application because of the constant locking every time an instance is requested. Unlike the double-checked locking implementation, which makes sure that a lock is actually necessary and that there is no available instance.

Define an interface for creating an object, but let subclasses decide which class to instantiate. Factory Method lets a class defer instantiation to subclasses.

When we program to an implementation we risk making our code more fragile and less flexible. When we handle the instantiation of concrete classes explicitly, this is exactly what we are doing… By doing this, we subject our code to the severe impacts of change. One of these consequences is that we force ourselves to modify already existing code when we want to change the object creation routines or add new concrete classes, thus, breaching one of the OOD principles:

“Your code should be open for extension but closed for modifications.”

A common thing to do when we have a part of the code that is likely to change is to:

“Identify the aspects that vary and separate them from what stays the same.”

Use the Factory Method pattern when:

Factories can only be used with a family of classes. If these classes doesn’t extend the same base or interface, then we can’t use factories with them.

The Decorator Pattern attaches additional responsibilities to an object dynamically. Decorators provide a flexible alternative to subclassing for extending functionality.

You might find yourself while working on a project and in the need of adding/modifying responsibilities or behaviors to objects of a certain type. One way of approaching this problem is that we extend this type using inheritance and add the new behavior to it in its children. But what would happen when we want to add more than one responsibility for some objects while keeping others with only a single new responsibility? Then, we would have to implement all the combinations of these responsibilities and ending up with what can be called as a class explosion; as you’ll end up with a lot of classes, more time to debug and a lot of those long & lonely nights of maintenance.

An answer to this problem would be to extend the behavior without using inheritance. This can be achieved by using composition to wrap the components by the decorator and add new behavior/properties or modify already existing ones in the runtime. Using this approach we can avoid having to use inheritance and constrain ourselves with static (compile-time) extending to the objects and use instead dynamic (runtime) extending of those specific objects. Also it allows us to add the needed behavior according to the specific conditions that occur during the runtime; meaning that objects of the same type can end up being decorated differently and that the same object can be wrapped in more than one decorator.

Design principles behind this pattern:

You might ask yourself if the decorator pattern teaches us to favor composition over inheritance, then why does the DecoratorBase class extends the Object's super class? The answer is that the decorator is extending this class to gain the same interface as the object it will wrap, not to gain the behavior. Thus we extend the base class to get the interface but we're getting the behavior through composition of decorators with the base components as other decorators.

Advantages of using the decorator pattern:

One of the shortcomings of using the Decorator Pattern:

Define a family of algorithms/behaviors, encapsulate each one and make them interchangeable. The Strategy pattern lets the algorithm vary independently from the clients that use it.

In some situations, we might find ourselves working with classes that only differ in their behavior. If we use inheritance, we’ll have to override the behavior every time we want to derive a class and want to change the algorithm, but when we want to remove special behaviors we would override them with empty methods because the algorithms are hardwired in the classes. Such rigidity in the implementation breaks an important OO principle, which is flexibility.

Also another approach would be providing an interface for each algorithm, this way only classes that should have this algorithm can implement it; thus, solving some of the first approach's shortcomings. But it will have its own disadvantages like duplicate code . Also, by applying this approach, we can kiss code reuse goodbye since we'll have to write the algorithm in each class. Consequently, the slightest change in the implementation will require us to go over all the classes and change them too. These shortcomings would create and ideal "Maintenance Nightmare".

We can conclude some of the restrictions that prevent us from using any of the previously mentioned approaches, include:

The design principles behind the pattern

Use the Strategy pattern when: 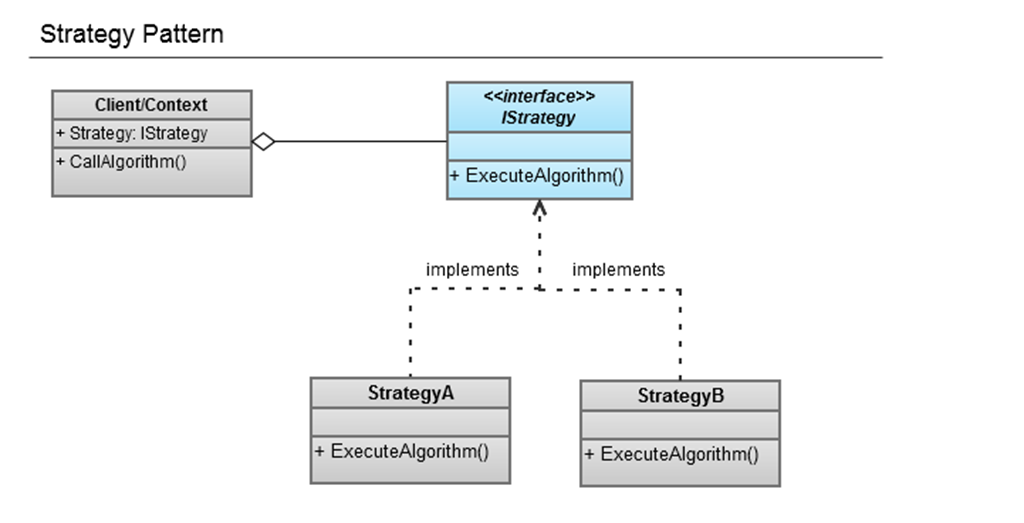 The strategy design pattern splits the behaviors of a class from the class itself, resulting in the following advantages:

Yet, the strategy design pattern has some draw backs (from GoF's book):

What are Design Patterns?

“Each pattern describes a problem which occurs over and over in our environment, and then describes the core of the solution to that problem, in such a way that you can use this solution a million times over, without ever doing it the same way twice.”Christopher Alexander

So we can simply say, that some of the design related problems that we encounter while developing software are solved by someone else. These solutions allow us to solve our own problems and take advantage of other developer’s experience and wisdom.Design patterns are descriptions of communicating objects and classes that are customized to solve a general design problem in a particular context.

Important note: Design patterns are considered guidelines; they are powerful tools that aid developers, but they should never be regarded as rules/specifications that software should follow. That’s why it is important to understand these patterns well and know the proper situations where we could use them. Otherwise, the usage of incorrect patterns might result in unnecessary complications or maintainability issues. To avoid such inconveniences, we should always go with the simplest solution that does the job and introduce patterns only when needed.

In a way we could say that anti-patterns tell us how to go from a problem to a bad solution. Using anti-patterns in practice, leads to counterproductive results or ineffective solutions to the problems that might face us.

A pattern has four essential elements:

The documentation for a design pattern describes the context, where the pattern is used, the forces within the context that the pattern seeks to resolve, and the suggested solution. There is no single, standard format for documenting design patterns. Rather, many different formats have been used by different pattern authors. One example of a commonly used documentation format is the one used by "Gang of Four" in their book Design Patterns

It is as follows: